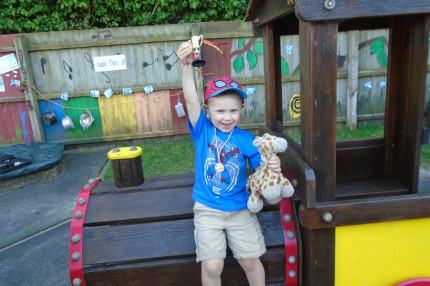 W/k 18th June 2018 we hosted another amazing Busy Bees Enrolment Week this time with the entire week themed around the World Cup.

For this entire week all activities in every room were based around 'balls'!  Small balls, large balls, football, basketball, find the ball, ball rolling, ball painting, if the nursery staff could think of it the children were having lots of fun exploring it.

One of our main events came from our preschool room 'Chameleons' where they decided to have a Mascot based competition of whos group can score the most penalties over then week! Would it be Marvin? Wound it be Oscar? Would it be Gerald? Only time would tell. Over the week it was hit and miss (no pun intended) on who would be taking home the Busy Bees World Cup Trophy. After many many penalties and a fantastic amount of support for each other over the week the winners were announced ................. a huge congratulations to Gerald`s Group (Lauras Keygroup). All Chameleons children did fantastic and we couldn`t be more prouder of all the support, signs, cheering, comforting etc they gave to one another over the weeks competition. Well done Chameleons

Whilst all the fun was being had we also were keeping an eye on the World Cup itself. Chrissie have given each room Caterpillars, Butterflies, Tadpoles, Frogs, Chameleons, The Kitchen & The Parents a hat to pick out a world cup group and this would be the teams we were all  to support. It all got very competitive at some stages! But in the end it came down to France Vs Croatia so within the nursery it was Parents Vs The Kitchen. And we all know how the game ended with France lifting the trophy so well down Parents your team prevailed this time.

These weeks are always super exciting for the children who attend our nursery and Chrissie and all staff always look forward to new families coming to have a look around to see what we are all about, and this time was no different we welcomed lots of families who had a lots of fun exploring and looking around. So if you are looking for "OUTSTANDING" childcare give Chrissie a call to either book in a show around or simply pop in during our next enrolment week for a chat so keep an eye out there will be another very very soon.