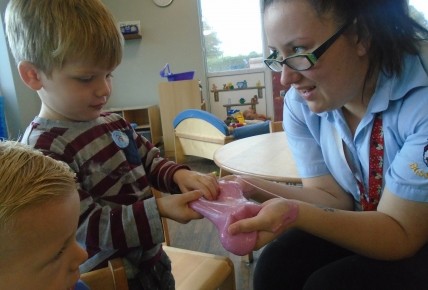 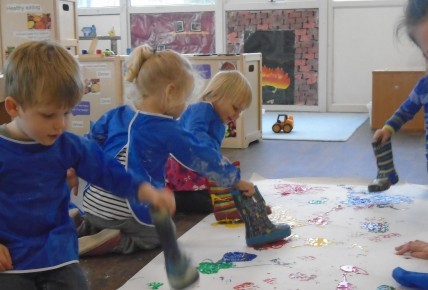 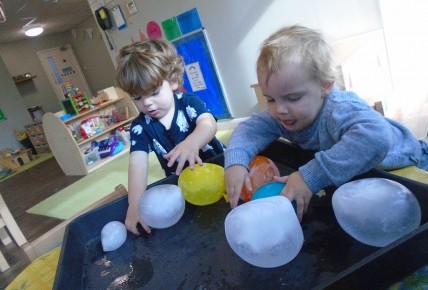 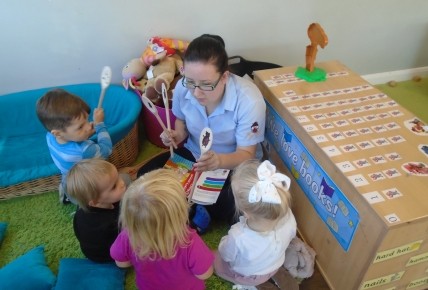 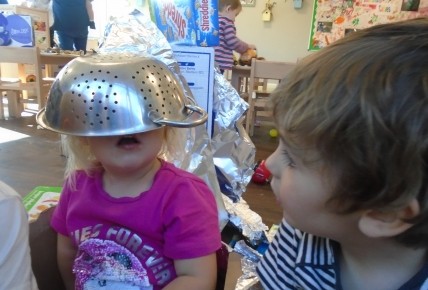 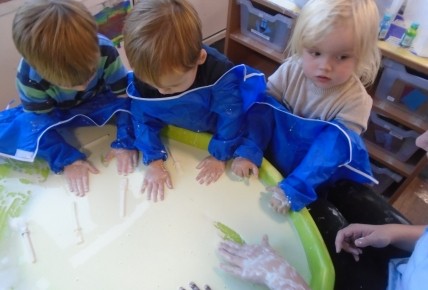 Toddler room started the week with a rather messy activity.  Stretchy Slime and gloop was made available to the children, they chose to label colours along with run the slime and gloop through their hands and fingers.  They particularly enjoyed rubbing the slime across their tables and picking it of their hands afterwards.

Next they took part in painting activities with a twist!  Firstly with welly boots!  They children got to use the welly boots, dipping them in the paint and then printing their footprints across the paper.  Some of the children were identifying the colours as they printed and also realised that if they stomped the boot it would also make a splatter print around them.  They then moved on to plastic wallet painting which is a favourite in our toddler room.  Paint is put into a plastic wallet, sealed and stuck to the table.  The children would come and go touching, poking and making patterns within the paint.

This activity led on to gluing and sticking where they children used coloured tissue paper to create stained glass windows.  Once they had completed their design they wanted to hold the pictures up to the windows to see the light shine through and make patterns from the reflections.

Midweek toddlers explored balloons filled with frozen water; they squirmed at the coldness while they explored the texture of feeling a hard balloon.  Next they were tasked with finding the hidden objects within the sand.  They had to dig around finding an object underneath the surface by using the spades and collecting the different textured objects.  This time we used Shapes and Numbers where the children also identified them as they found them.

To finish off the week the children enjoyed a day of their favourite stories.  Goldilocks and the three bears was read to the children and acted out using wooden spoon figures.  Then the children got to make their very own porridge for the bears.  They also read ‘Whatever Next’ followed up with making rocket ships from boxes and foil to travel to the moon and back.

We welcomed children from our local area who with their parents/carers, got to enjoy in the activities alongside us and look forward to our next open week.