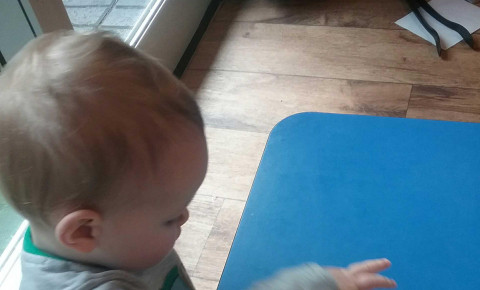 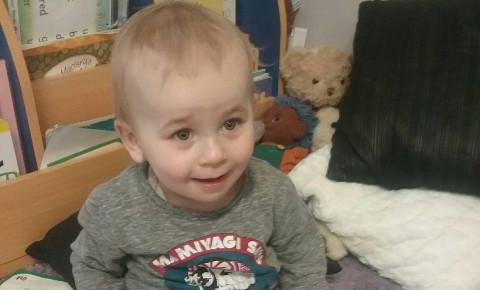 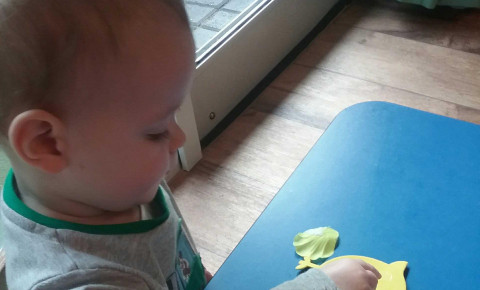 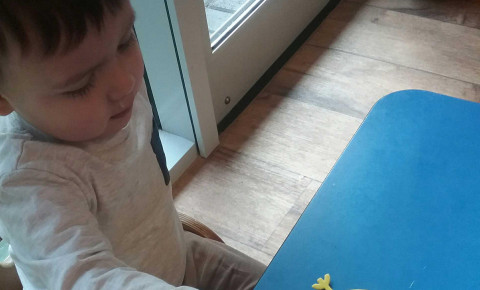 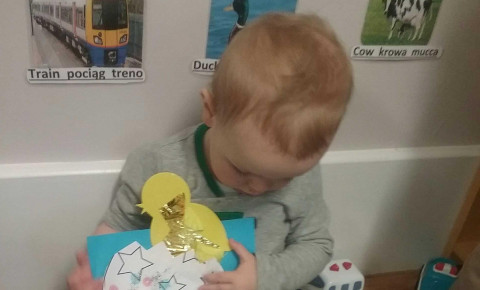 In Rabbits Room and Owls Room (1-2 years) we decided to celebrate Easter by getting creative. We allowed the children to create multiple pieces of art work whilst being supported by the staff members. First of all, we let the children choose which colour card they wanted to use. Next, we let the children get messy by putting their hand in some paint. After their hands were covered, we encouraged them to splat their hand on the paper, leaving a handprint behind. Vinnie said "wowww" whilst doing this and Jayson picked up the paintbrush by himself and begun painting his own hand. The children then used one of their fingers to create finger marks next to their handprint.  After the paint had dried on the card, the staff members drew eyes, a beak and some feet on them to make the hand print look like a chick. The next part of the activity was decorating our Easter eggs. Using outlines of Easter eggs, we gave them to the children along with some dabber pens. Natan sat at the table nicely and begun decorating his egg. He carefully dabbed the pen across the paper, watching what marks they were making as he done it. Hisham was next up, he grabbed the dabber using a full hand grasp and flung his arm in the air, dabbing the dabber back down onto the paper.  Each child had a turn of decorating their own egg. The activity is not finished yet, next we needed to decorate chicks! We provided the children with glue spreaders, PVA glue and decorative materials. One by one the children dipped the spreaders into the glue and put it all over their chick. During this part of the activity Robin used her fingers to spread the glue. After this, the children picked up the small pieces of materials and stuck them onto the chick. When all of their art work was completed a member of staff stuck it all on to the same piece of card their hand prints were on.

What did the children gain from this activity?
During this activity  the children got a chance to use their imagination and express themselves through their artwork. Each child individually gained different things from the activity. A few examples would be;
Vinnie used the glue spreader with confidence and took his time when spreading the glue, which supports not only his Physical Development, but also his concentration. He also said"Wow" and expressed himself by babbling the whole way through the activity, which supports his Communication and Language.
Riley was a bit cautious of the activity when we first started. A member of staff encouraged and supported Riley throughout. This gave Riley confidence to engage with others whilst decorating his egg.
Overall, each child learnt different things by taking part in this activity.