The Toddler Blog- Dinosaurs in the woods 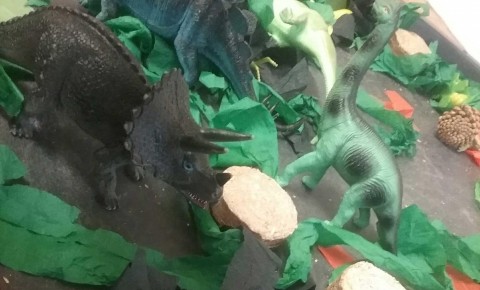 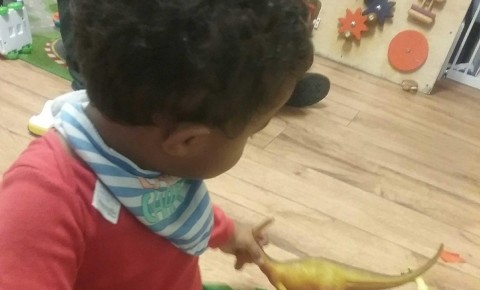 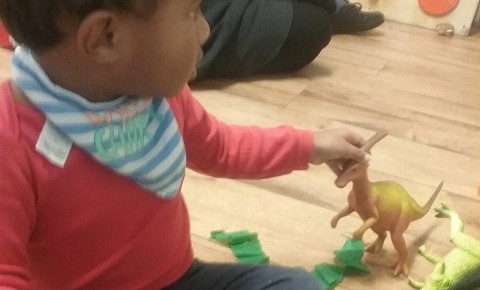 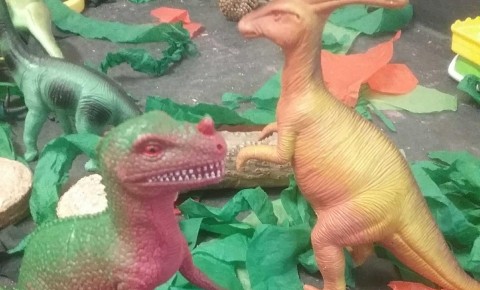 Dinosaurs in the woods

In Rabbits Room (1-2 years), Zalihe set up a one to one activity for Elijah. The activity included items such as a tough tray, dinosaurs, wooden logs and coloured paper. The aim of this activity was too let Elijah use his imagination and bring the toys to life. The wooden logs resembled trees and the coloured paper (green) resembled leaves and bushes in the forest. The dinosaurs were of all different shapes, colours and breeds which Elijah seemed to like. Elijah picked up a dinosaur and said "tail", whilst pointing to its tail. He then said "pink dinosaur", recognising the colours. When a staff member asked Elijah if he could find a yellow dinosaur, Elijah done this without any hesitation. When Elijah was sitting at the tough tray he picked up one dinosaur and said "1", he then picked up another and said "2". A child come over to the tough tray and wanted to join in with the activity, Elijah passed them a dinosaur and encouraged them to sit down.

How does this support the EYFS

Such a simple activity, can benefit a child’s development In more ways than we know. First of all, at the start of the activity Elijah straight away picked up the dinosaur and named one of its features. Throughout the entire activity, Elijah kept on making comments about the dinosaurs. This supports his Communication Language Development and his Understanding Of The World Development as he is using his words to create meaning to what he is saying and he is also aware of the dinosaurs body parts. When Elijah counted how many dinosaurs he was picking up, this supports  his Mathematics as he knows how to count and he recognises that there is more than one object. A peer then approached the activity, which Elijah welcomes by handing them a dinosaur. This supports  Elijahs Personal Social Emotional Development as he is building relationships and reassuring others.

Creating your own world at home

Weather - In a tough tray, you can get creative and add some sand for sandstorm, ice for snow, water for rain and cotton wool for clouds. Speak about the weather with your child to help them learn about the subject, you can even add some leaves etc to represent autumn and speak about the different seasons.

Bugs in mud – In a tough tray, add some mud, leaves, twigs etc. Then add some bugs- which could include spiders, worms, stick insects, ants. Bury the bugs in the mud for your child to search for. Let your child use their imagination and gives the bugs names and superpowers!

Under the sea- Fill a tough tray with water, add some blue paint and mix together to brighten it up. Then add some sea creatures, boats, logs etc and create an under the sea tray for your child to splash around in.