My name is Erika, and I have been in childcare since 2001. I joined Busy Bees Oxford as an Assistant Manager in June 2015 when we first opened, and became Nursery Manager in May 2017. I previously managed another nursery before joining Busy Bees, and chose to leave there when Busy Bees offered me an opportunity to work in their new setting.

The most important part of my job is ensuring that we are delivering high quality childcare at all times and I strive to ensure this is the case at all times.  Happy children also mean happy parents!  We have a highly qualified staff team, who bring a lots of experience and passion with them; without them I wouldn't be able to offer such a great service!

Pop along and see our beautiful nursery - you won't be disappointed! 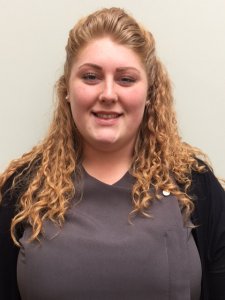 Alanah is the Assistant Manager.She joined us in October 2015. She is also the Health & Safety Coordinator of the nursery, as well as the Childcare Rep. She is qualified and has a CACHE Level 3 Diploma in the Children and Young People Workforce. She has been working in childcare since 2013.

Sue joined us in September 2017. She has several years experience working as an admin.

Hannah is Senior Room Manager in Baby Room and joined us in Aug 2019. She has a Level 3 Diploma in Childcare, and has several years experience working in nurseries.

Connie is the Senior Room Manager for our Preschool Room, as well as our SEND Coordinator Buddy for the nursery. She has a Level 3 Diploma in Childcare. Connie has been working in childcare since 2010. She joined us when we first opened in June 2015.

Emily is the Room Manager of Preschool. Emily has a CACHE Level 3 in Childcare and qualified in 2008 and has worked in nurseries ever since. She has been with us since the nursery opened in June 2015.

Casey is the Room Manager in Toddlers. She has a Level 3 Diploma in Children & Young People's Workforce. She joined us in April 2017.

Jade is the Assistant Room Manager of the Preschool Room. She has been with us since the nursery opened in June 2015. She is also the Behaviour Management Rep of the nursery. She has a Level 3 Diploma in Children & Young People's Workforce.

Maria is the nurseries Head Chef. Maria has a chef's certificate of Higher Learning from Sweden and a BA in Social Studies from North Central University in Minnesota. Maria has worked in various restaurants and schools in Sweden and moved to the UK in 2015

Samantha is the Lunch Cover in the Baby Room. She joined us in January 2018.

Aaron is the nursery Assistant Chef. He works alongside the Head Chef to ensure all the meals are freshly prepared each day. Aaron has a Level 2 in Food & Hygiene. He joined us in April 2016.